Toronto’s goalie situation is a bit…weird. Both our main goalie and our backup goalie got injured. Freddie Anderson is out with a groin injury and Garret Sparks out with a concussion, no thanks to Nylander. So, the Leafs traded away a 5th round pick in the 2020 draft to the Florida Panthers for goaltender Michael Hutchinson, who has started for the Leafs the past 5 games. 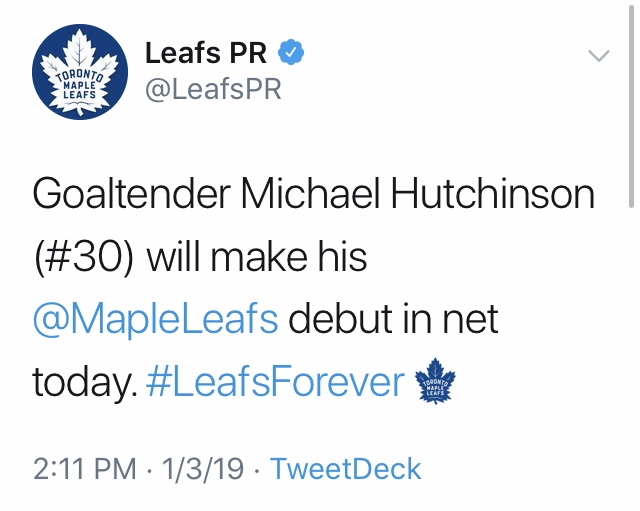 Hutchinson’s first game as a Leaf was against the Minnesota Wild, where Toronto lost 4-3. The next was against the Vancouver Canucks, where the Leafs won 5-0, this game was Hutchinson’s 4th ever shut out, his last coming in October of 2016. Then, the Leafs got shut out by the Nashville Predators in an overall disappointing game. On Thursday Hutchinson started in goal against the New Jersey Devils, winning 4-2. Though he let in 2 goals, he also made some really nice saves.

Freddie Anderson was hoping that he would return to the goal tonight (Saturday, January 12th) against the Boston Bruins, but it seems that he ended up not being 100% ready. Hutchinson started in goal for what could possibly his last game, at least as a starter, tonight against the team that drafted him. The Leafs ultimately falling 3-2 to the Bruins. 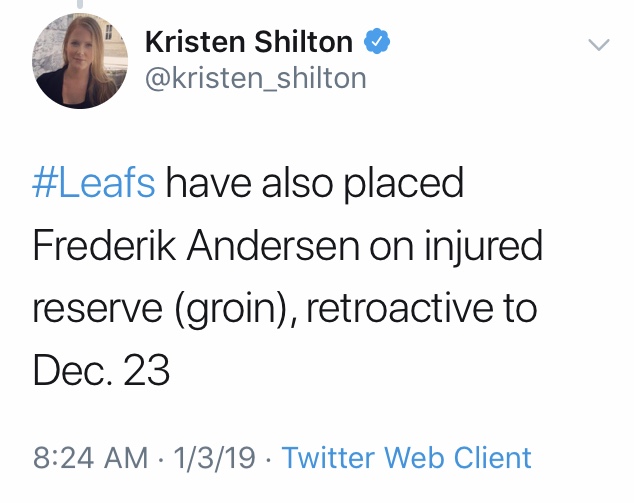 Mike Babcock has said that Freddie will most likely make his return to net on Monday against the Colorado Avalanche. As for Garret Sparks, he was seen skating at practice with the team on Saturday morning. Though no possible return date has been announced at the time of writing this.